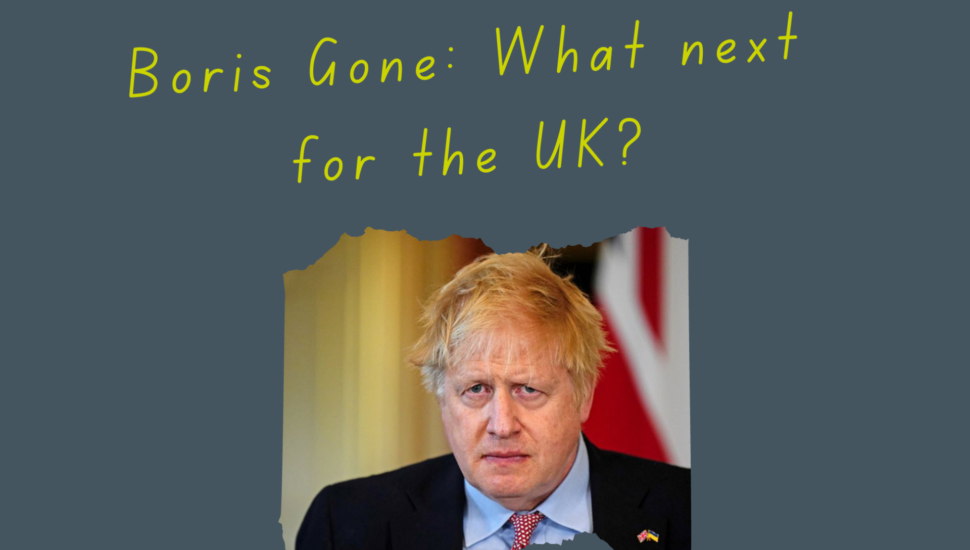 Johnson was elected with an 80 seat majority in the House of Commons in 2019. With the echoing rhetoric “get Brexit done” this Conservative leader won his majority and even took seats in the historic “Red Wall” in the North of England. However, even before he became leader of his party, his political and journalistic career has been shrouded in scandal after scandal.

In recent months, the people, the opposition, and even the Conservative party have been showing growing discontent with Johnson’s premiership. This is a result of an array of factors such as Party Gate, handling of Covid19, the cost of living crisis, the Rwanda plan, the spending and PPE scandal, along with various sex scandals involving Tory MPs, to name a few reasons. Somehow the PM had overcome all of these, but now the only option is to resign. Many argue he has tainted the Conservative brand and many of the party wish to wash their hands of him to get a ‘fresh’ image. This comes as polling for the party has been shockingly bad.

Thursday it has been announced the Prime Minister has accepted his fate and resigned. In his resignation speech he was surprisingly chipper and did not address complaints against him or the conservative party as a whole. As predicted he dwelled on ‘positive’ aspects of his leadership without addressing the underlying complaints with each of these. Now the country must wait for a new leader and to see if there will be a caretaker leader in the meantime.

It is uncertain at this time what the full effect will be on the British pound and new policy direction for taxes and UK SMEs during this cost of living crisis. You can read here about the effects on the Pound after the resignation was announced.

You can read this piece from the BBC here on the likely candidates to replace Johnson.

In the recent twist of political events Chancellor Rishi Sunak and Health Secretary Sajid Javid resigned on Tuesday off of the Conservative front bench. Following this, now the PM has announced resignation after some of his cabinet ministers waited in number 10 to call for him to do so.

The Minister’s resignations came within minutes of each other with many thinking it was planned out and coordinated as part of a wider bid for either men’s leadership ambitions. Other junior ministers have also resigned recently due to general discontent within the conservative party over scandals and leadership. Furthermore, the vice-chair of the Conservative party resigned live on television. At the time of writing this, 59 other resignations have been handed in also. There are current discussions on who will be the ‘Caretaker PM’ in Boris’s absence, many do not want him to be the leader while a new leader is selected. There is a rush to fill the places of those who have resigned so the government can be somewhat functioning.

In his resignation letter, Sunak stated various reasons for the move. The main reason noted however, was disagreements over the economy and Johnson’s lying and defense of questionable members of the house.

The cabinet reshuffle was almost immediate; Johnson replaced Sunak with Zahawi, the former Education Secretary. Steve Barclay replaced Javid. Obviously now the PM has resigned, this is likely to be shaken up again in the coming weeks/months when a new leader takes control of the party. This will have interesting implications for UK businesses over the coming months as well as the value of the pound.

“It’s always an interesting time whenever a PM or Chancellor of the Exchequer resigns. This is because you can never quite tell what kind of leadership their replacement is going to bring to the role. It’s important to remember that every PM and Chancellor that Britain has had, has always brought their own unique sense of governance to the role and this personality is what affects policy going forward. With Boris announcing his resignation, there will be a period without a leader until the leadership election, this could bring about uncertainty in the value of the pound.

It will be interesting to see what type of Conservatism the new Tory leader will advocate for: a One Nation approach or a New Right standpoint. Whichever approach favoured can have implications for tax, welfare, and social policy direction. It will also be intriguing to see if an early General Election will be called.”

In times of financial uncertainty, Goodman Corporate Finance has got your business covered!

If you are interested in learning more about Goodman’s bespoke broker services and how we can help your specific finance needs, then you can click on the relevant links: Asset Finance, Corporate Finance Services, invoice finance, or Property Finance.

Already have an idea of what type of financing you require? Don’t hesitate to get in touch. Contact us here or call us now on 0333 3583502 for a free consultation with one of our expert corporate finance specialists.

Allow your business to survive and thrive! Get in touch today.